When his first ever day of selling at the Milwaukee Winter Farmers Market was canceled with a day’s notice, Stephen Blanchard wasn’t sure what to do. Stuck with a surplus of sourdough bread and nowhere to go, he turned to social media.

The response was immediate and he sold out that weekend. Word spread, and he’s now baking specialty sourdough loaves for delivery and pick-up.

Every week, he makes sure to have his country wheat available, too. Priced at $3.50, it just covers the cost of his ingredients. It was his wife Christine Burke’s idea, and it is their way of saying thank you and giving back while families are struggling.

Look for Stephen’s Artisanal Breads and Baked Goods on Facebook at www.facebook.com/stephensbreads/ or email stephensbreads@gmail.com.

I’m in St. Francis, and I grew up in Bay View. I’m actually a mortgage post closer. After you close on the mortgage loan, my job is to clear the loans so another bank will purchase.

I wanted a challenge. That’s why I chose bread baking. When I was in my early 20s I learned to cook by myself. I was trying some basic breads, like banana bread. Then I started making a sourdough starter, which is what you use to create the dough I have now.

Sourdough starter, is just flour and water, and it sits there until you get wild yeast. That is yeast in the air that allows your bread to ferment, rise and fall. I started with that.

It utterly failed the first time. I put it aside a bit, then came back to it. Now I’ve had the same starter the past seven years.

Starting a side business

Bread was a side project. It is becoming something everyone wants from me. I’ve sold at my office here and there for about the past six months. I would sell to family and friends. I’d give out my stuff. I was looking into farm markets … In Wisconsin … a home baker can bake non-hazardous goods and low-moisture baked goods in their home kitchen.

When I reached out to the winter farm market, they got back to me late in the season and asked if I wanted to sell. That was the beginning of March. I said yes and signed up for the last few markets. Then the coronavirus hit and that was that. I baked 70 loaves that week for the market, and it was canceled.

My standard right now is a country wheat, a whole wheat bread. I mill my flour myself. I get my wheat from  Anarchy Acres (in Mount Pleasant), that’s one of them, and the other is Janie’s Mill, right down in Illinois. They’ve been a huge supplier for me.

I have country wheat, and I’ve been offering that to the community for $3.50, just my flour cost, to help with everything going on here. I do dill and white cheddar, cinnamon raisin, roasted garlic and Parmesan, along with a couple walnut varieties, a date, walnut and orange. I’ve done winter spice with nutmeg, cloves, allspice, ginger and cinnamon. I’ve done a bacon, apple and cheese which has been really popular, but bacon is expensive so I haven’t had much of that right now

Everything I use I try to source local. I use Spice House for spices, and cheese from Clock Shadow Creamery.

When I started doing this, I didn’t always like some of the flour I was using. I was using King Arthur, and I liked that. I used some cheaper flours before that, and I didn’t like it. King Arthur tells you the protein level in the flour. That matters. The higher protein means it is good for breads. Lower protein is good for cookies and pastries. Most flours don’t tell you this.

Then it was ‘what about flour from Wisconsin?’ I learned about Anarchy Acres, where he grows heritage wheat. Red Fife and Marquis are two old wheat varieties, both have unique flavors and make completely different types of bread when you taste them. I thought it would be nice to do (the milling) myself, so I could control what is in my bread and what isn’t. My wife got me a Kitchen Aid grain mill, then I went to Charlie Tennessen and asked him if I could buy wheat berries, which he sells to the public. Ever since, I’ve been making just whole wheat in my breads. It is not the whole wheat you find in most stores. The entire wheat berry is in the bread. I will sift some of the flour to remove the heavier pieces and allow a lighter loaf, but it is still 100% whole wheat and I can blend different flours for the flavor I want.

One batch of bread takes a day and a half …I used to bake always in Dutch ovens, because that allows the consistency even if you mess up with shaping. Since I’m now baking in the amount I bake, I have two big baking sheets that allow me to do six loaves at a time.

I always shoot for a little darker loaf. More and more, I score my round loaves with an S, too, just because it is simple and I know it is my bread that I made.

I’m doing online and email orders at this time. I put out a post in the beginning of the week telling people the varieties I’ll be making and asking for orders.

Fork. Spoon. Life. explores the everyday relationship that local notables (within the food community and without) have with food. To suggest future personalities to profile, email psullivan@gannett.com. 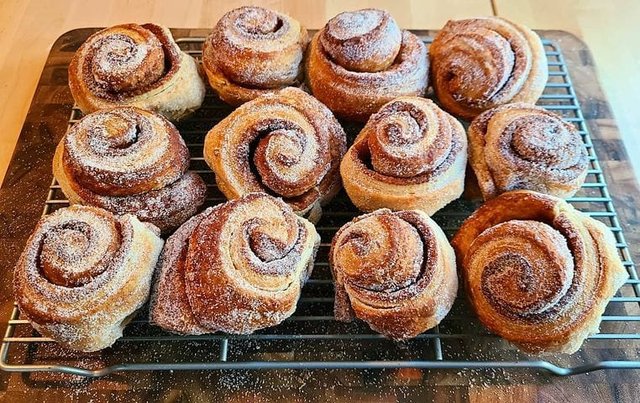 It’s been said that true artisan bread is like a fine wine. The precisely controlled fermentation yields unique flavor profiles with a crackly crust, open crumb (the bread’s interior) and a subtle tang. But in today’s demanding world, most of us don’t have the time or patience to pursue such perfection. Enter Stephen Blanchard, of Stephen’s Breads.

Several years ago, Blanchard started making quick breads like cinnamon raisin and banana. He later experimented with yeasted breads and eventually, sourdough. “I learned how to use starter instead of yeast, which adds a whole new dimension of baking,” he says. He’s been using the same sourdough starter for eight years.

Sourdough starter is flour and water that’s left to ferment, he explains. “As it ferments over the first few days, it starts building bacteria. At first, it’s bad bacteria that you don’t want in food. But the goal is to let that bacteria build up, and you will get wild yeast from that bacteria. That yeast is from the fermented flour and water. From there, you gradually discard old portions and add new until all the old bacteria is gone.”

Blanchard says the difference between a young starter or a mature starter is how often it’s refreshed with flour and water. A young starter is less acidic, giving the finished bread a slight tang versus an overwhelming sour flavor. Quality flour is considered an important part of artisan bread baking. Blanchard uses flour from local mills like Anarchy Acres, which grows wheat varieties traditionally grown in Wisconsin like Marquis and red fife.

Blanchard offers about 13 sweet and savory breads, including Country Spelt. His most popular varieties are Cinnamon Raisin; Garlic Parmesan; Dill and Cheddar; and Sweet Cherry Pecan. Customers can order from an online menu. The weekly specials are his experiments where he wants to try a new flavor. Fall specials include a red wine blend with raisins. “I soaked the raisins overnight in the wine and braided them into the bread. My caramel apple bread is made with apples from a local orchard.”

He’s inspired by ingredients sold by fellow farmers market vendors. Blanchard takes custom orders and gets requests for varieties such as Lithuanian Rye. He makes gluten-free bread upon request (his kitchen is not a gluten-free environment).Expand Launching a business during the pandemic

Blanchard’s bread became popular among family and friends. Co-workers started placing orders, and he considered farmers markets. In March, he was invited to be a vendor at the Milwaukee Winter Farmers Market, held every Saturday at The Domes. After making 70 loaves, he got a call on Thursday, informing him that the market had been cancelled due to COVID-19.

His wife, Christine Burke, posted their plight on the Facebook group Bay View Town Hall. “Within an hour, we sold 70 all loaves,” Blanchard says. “And within a couple of hours, we had a week’s worth of orders.”

Blanchard eventually left his job in the mortgage field to operate Stephen’s Breads full-time. He belongs to the Artisan Grain Collaborative, through which he participates in the Neighbor Loaves program that allows customers to buy a loaf of bread to donate to a food pantry. Blanchard and Burke grew up in Bay View and partner with the Bay View Community Center’s food pantry.

For the remaining summer farmers market season, Blanchard will be at the South Milwaukee Downtown Market, Fondy Food Center and Tosa Farmers Market. He hopes to participate in the Milwaukee Winter Farmers Market; it’s still pending if it will again be held at The Domes greenhouse annex. Customers can order online and pick up bread from a contactless pickup box. For winter, Blanchard may offer a CSA-style subscription box of breads of pastries.